Too often in client conversations, Forrester hears the terms “microservice” and “API” used interchangeably. To make your architecture and design patterns stronger, separate the two. Draw a hard line of distinction between them. Specifically:

Extend Your Microservices Thinking Beyond APIs

There’s another major reason to not conflate APIs with microservices: A microservice might easily provide something other than an API. It may provide an event source, an event sink, a stream, or a data interface, and it may even provide a visual component that returns a block of HTML. Furthermore, it might not reside on a server the way an API typically does — it could reside on the client or run in a browser.

Forrester recently came upon an excellent example of this in the user experience (UX) architecture of Infosys’ Live Enterprise Suite. Here’s the idea: 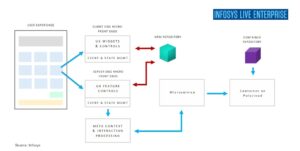 This type of architecture demonstrates why developers and architecture should not conflate APIs and microservices. It also points the way toward much more flexible and agile UX architectures that meet the demands of business agility and digital transformation.

Design For Empathy To Build Deeper Connections With Your Customers

Gina Bhawalkar January 23, 2023
Empathizing with customers is almost always the first step in design frameworks. Learn how to take the next step and embed empathy into your entire design process.
Read More