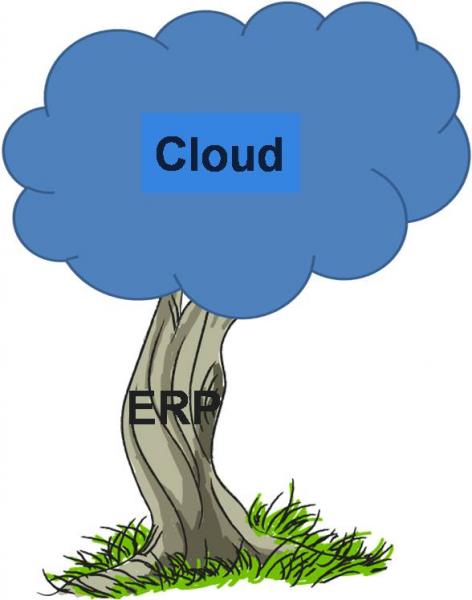 Cloud computing continues to be hyped. By now, almost every ICT hardware, software, and services company has some form of cloud strategy — even if it’s just a cloud label on a traditional hosting offering — to ride this wave. This misleading vendor “cloud washing” and the complex diversity of the cloud market in general make cloud one of the most popular and yet most misunderstood topics today (for a comprehensive taxonomy of the cloud computing market, see this Forrester blog post).

Software-as-a-service (SaaS) is the largest and most strongly growing cloud computing market; its total market size in 2011 is $21.2 billion, and this will explode to $78.4 billion by the end of 2015, according to our recently published sizing of the cloud market. But SaaS consists of many different submarkets: Historically, customer relationship management (CRM), human capital management (HCM) — in the form of “lightweight” modules like talent management rather than payroll — eProcurement, and collaboration software have the highest SaaS adoption rates, but highly integrated software applications that process the most sensitive business data, such as enterprise resource planning (ERP), are the lantern-bearers of SaaS adoption today.

Thus, I was very interested to hear the news from NetSuite, a native ERP SaaS vendor, and its partners at SuiteWorld 2011 in San Francisco last week. The message was loud and clear: ERP SaaS has matured and found its way into all verticals, geographies, and sizes of company! While NetSuite continues to expand its globalization (with localization for more than 30 countries), its vertical expansion is more of a partner play, with partners building configurations and extensions for tailored industry solutions. In general, SuiteWorld focused strongly on the partner ecosystem. I have seldom seen a CEO keynote that mentioned and brought on stage so many partners (and customers) as the one by Zach Nelson. The impressive number of new partnership announcements — including Accenture, Ariba, Callidus Software, Citrix Systems, Concur Technologies, EchoSign, NEC, Oracle, PitneyBowes, and more — demonstrated the importance of NetSuite’s growing partner ecosystem.

Perhaps the most interesting expansion of NetSuite’s ERP SaaS market, however, is into large enterprises. Supported by some of its new partners, such as Accenture, NetSuite reported a number of deals with the subsidiaries of very large, global organizations (including Jollibee, MiTAC, NBTY, and Olympus) that integrate a local NetSuite setup with a corporate ERP solution. NetSuite calls this a two-tier ERP strategy; it clearly targets Oracle’s and SAP’s home territory. As SAP recently announced that it will also start to offer its Business ByDesign SaaS solution to large enterprise subsidiaries, we will see an interesting “David and Goliath” clash in the future; we know who won the historic fight. ERP sales are mainly feature-and-function-driven, and NetSuite’s native SaaS solution is a number of years ahead of the competition. 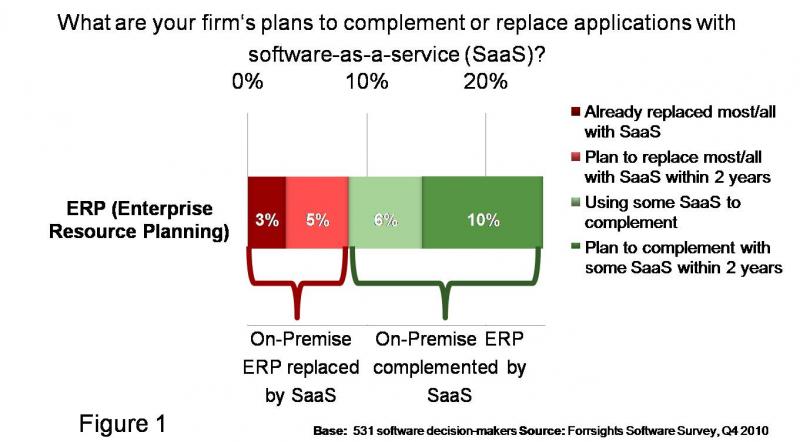 The results from our most recent Forrsights Software Survey clearly support the trend of growing ERP SaaS adoption, mainly via a two-tier ERP strategy (see Figure 1). While about 9% of all companies are currently using some form of ERP SaaS solution, two-thirds of those are using it to complement existing on-premises ERP systems. And adoption will accelerate: Within the next two years, penetration will more than double, with another 15% of companies planning to implement ERP SaaS before 2013. Again, two-thirds (10%) of these planned implementations will use the new ERP SaaS solution to complement existing ERP assets.

But large enterprise penetration has its price. SAP’s R/3 was also developed for small companies before the first large enterprises bought into it and started to influence the company’s strategic direction. On the plus side, overall innovation will further accelerate as ERP SaaS moves upmarket, where more investment money sits. The challenge will be to keep a healthy balance in serving small and large enterprises alike.

It was also interesting to see what NetSuite will focus its innovation efforts on in the near future:

SuiteWorld 2011 was an excellent event, with lots of interesting news that confirms that ERP SaaS has not only matured but is growing right into the cloud.

Download our guide to learn how to innovate faster with a tech stack modernized by cloud.