The current state of business continuity management (BCM) standards? Abysmal. According to a joint Forrester/DRJ study, 69% of respondents said that British Standard (BS) 25999 did not influence or only somewhat influenced BCM at their company. It’s not much better for NFPA 1600, 70% of respondents said that it did not, or only somewhat, influenced BCM at their company. I find this shocking. BS 25999 is one of the most widely recognized standards for BCM worldwide and NFPA 1600 has been popular in the US for years. In addition, the U.S Department of Homeland Security’s Private Sector Preparedness Program (PS‑Prep) recognizes both of these standards for assessing preparedness. If you’re wondering what standards respondents named in the “Other” category, it was mostly the Federal Financial Institutions Examination Council (FFIEC) and NIST. Not surprising but also a little disheartening, it’s clear that unless compelled to do so, most BC professional would not adopt or follow a BCM standard. 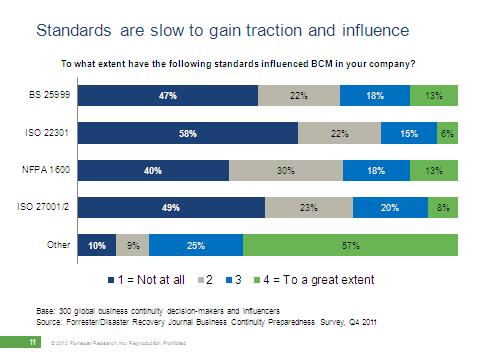 Even if you don’t intend to certify to these standards, they should strongly influence your BCM program. Why? It’s because:

There are also a few good reasons why you should consider certification in the long-term:

And before everyone sends me a bevy of snide tweets and leaves me angry blog comments, I know that certification does not ensure complete readiness, any more than compliance equals security, however I do think it signifies a base level readiness and a commitment and seriousness about BCM.

I’m curious to hear from all of you, what standards are you using (or not) as part of your BCM programs? What made you decide to utilize (or not) certain standards?