On December 8, Alipay celebrated its 10th anniversary by launching the latest version of its digital wallet. What makes this upgrade different and notable is its “10-year statement diary” feature. The statement diary contains data like when a user first made a purchase on Taobao, opened a Yu’ebao account, created an Alipay wallet, hailed a cab using Kuaidi Taxi, and followed a service window. Not only do these 10-year statements record every Alipay customer’s consumption experience, but put together they also trace the rapid development of online payments in China. 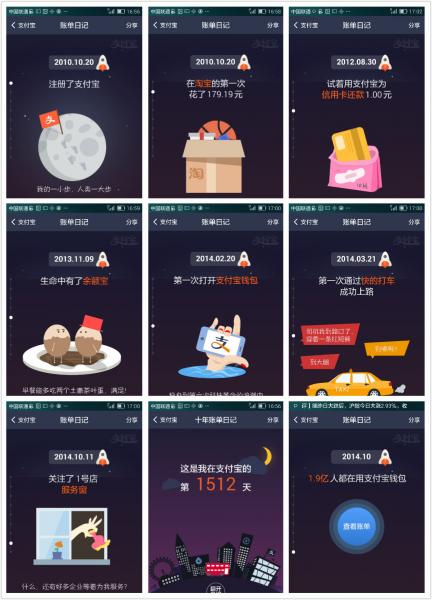 Alipay data indicates that, in the past 10 years, Chinese people have made 42.3 billion transactions via the platform, which now handles more than 80 million transactions daily. More people than ever are shopping on their mobile phones: as of October, Alipay counted 190 million mobile app users, and the proportion of online payments being made via mobile devices has exceeded 50%. The four regions with the highest mobile-to-online payment ratio are China’s underdeveloped western provinces: Tibet, Shaanxi, Ningxia, and Inner Mongolia. In addition, the proportion of Alipay users coming from the younger generation is increasing: 32%of all Alipay users were born after 1990, so the new main force of online shoppers is just now coming into its own and will only get bigger.

In addition to the increase in online consumption, Alipay is also driving new mobile payment technologies. The latest iOS version of Alipay includes fingerprint authentication. iPhone users can now use their Alipay wallet to pay with a fingerprint — which is faster and more secure.

Alipay has also been continuously expanding its functions and payment areas over the past 10 years. People used to have to queue at a physical location to pay utility bills, top up their mobile phones, and make credit card payments — but now all of these activities can be done via Alipay. By partnering with offline retailers and merchants, Alipay has extended its payment method to physical stores and local amenities like convenience stores, laundries, dining services, and taxis. With the rapid fusion of online and offline business, digital payments are bringing more offline resources into the online payment ecosystem and integrating online payments more tightly into people’s daily lives.

Alipay has changed Chinese consumers’ habits, making mobile payments more convenient and popular — a significant driver of mobile commerce in China. Forrester forecasts that online spending via mobile in China will grow at a compound annual rate of 44% between 2014 and 2019. Digital is truly becoming a lifestyle in China.

Christina Schmitt 2 days ago
Technology is not the exclusive core expertise of IT anymore. For many years, technology has had a place in the B2B marketing strategy and represents a big part of marketing’s responsibility. In addition to implementing and running the relevant marketing technology, marketing requires the knowledge to use it effectively to drive the revenue engine, create […]
Read More