Skip to content
< Blogs
Home > Featured Blogs > Can We Talk (Honestly) About The Executive In The Room? 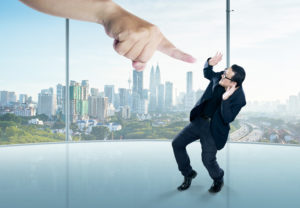 It’s easy to pick out truly bad examples of leadership. In every organization you are part of — from the parent-teacher cooperative to the leaders of nations — there are inept leaders who seem to have cajoled or manipulated their way into their roles. Despite how easily such examples come to mind, however, these egregious examples are few. And they usually get found out and moved out, especially under the microscope of today’s social media environment.

The more pervasive problem is the OK leader. They are not corrupt nor inept. They are not cheating the system or exploiting their employees. Instead, they are just OK. Rather than sharks that threaten your survival, they are barnacles that add drag to our economic vessels as we try to sail the high seas of competition and customer obsession. And the problem is, if you look below the water line or in the executive washroom, these “just OK” leaders have collected by the thousands.

Your just-OK leader is a drag on your transformation to becoming a customer-obsessed enterprise.

Said more directly, “You, just-OK leader, are a drag on your organization’s transformation.” In fairness, you’re merely human, like the rest of us (not a barnacle, though I stand by the analogy). You have your flaws and skills, you have good days and bad. Me, too. So please consider everything I say here in the spirit of sympathy rather than accusation.

That said, you, just-OK leader, are a problem that you don’t even realize you have created. A former CEO of a major PC maker once shared with me a humorous anecdote of how he boarded the corporate jet to get to an important meeting across the country. The staff on the plane obeisantly approached him and said, “Mr. X, we understand that you prefer Dr. Pepper and that you want it warm, with ice. We have everything prepared just the way you like it.” His first thought: Where did they get that idea? He didn’t know whether to be touched by their sincerity or annoyed that they were wasting cycles trying to cater to the whims of the CEO.

It’s a trifling example. I have worse. I could tell you about the time I had a meeting with the CFO of one of the world’s largest media companies. Two weeks prior to that meeting, I had to meet with the SVP sponsoring it to go over the rules of conduct. There were words I could not say, data I could not share, and concepts — notably, cord cutting — that were strictly verboten. That was bad enough. But will it surprise you to learn that, prior to the face-to-face with the SVP, I had to have yet another meeting? This time with the VP, who prepared me for everything the SVP would say so that I would not be shocked by any of it. I said to him (the VP) and her (the SVP) the same thing I will tell you now: When the effect of an executive in the room is so damaging to the flow of correct information, including informed opinions of an analyst you are paying to speak to you, the executive is a drag on the company. Worse than merely being ineffectual in overcoming obstacles, this executive had become the obstacle. Everybody knew it, and everybody had decided to go along.

That was many years ago. Guess what? Millions of people have since cut the cord, just as my naughty data suggested they would. That CFO was ousted within a few years — then the VP, then the SVP. I’m still here, but it gives me no satisfaction, because I can assure you that the company has not changed. And why would it? Executive — whether the CEO or SVP — have final authority over their employees’ livelihood. Executives are the immovable objects employees will factor into every decision they make. It would be irrational for employees to do other than treat you like an object. All you can do as a leader is choose what kind of object you are.

Choose Not To Be A Barnacle

I’m very pleased to share with Forrester clients a new report as part of our update on customer obsession. It’s called “The 2020 Leader,” with the subtitle “You Can’t Give What You Don’t Have.” As we are on the verge of a new decade that happens to have the same name as the method by which we describe correct vision, we took the opportunity to pause for a moment of vision and clarity. This comes after spending the last four years measuring customer obsession — what it looks like, what it does for your organization (answer: just about everything you want), and how to get employees to increase the firm’s customer obsession. We have stepped back from our work to clarify something our data makes painfully plain. Your enterprise can’t become customer-obsessed without customer-obsessed leaders at the helm.

Therein lies the path from just-OK leadership to great leadership in our times. Instead of making yourself the object that your employees spend their time plotting around, planning for, and adjusting to, you redirect the attention to the customer. And you show that you are serious by demonstrating customer obsession with your own actions. As we write in the report, this is almost devastatingly simple to do. You just have to choose to be that leader. Rather than obsessing about the beverages in the corporate jet or making it clear you don’t want anyone to bring up existential threats to your industry, you point everyone’s focus directly at understanding customers, elevating their experience, and improving their outcomes. Of course, in the report, we are more specific than that. We have, for example, identified five behaviors that leaders at the most customer-obsessed firms do better than others, from modeling how to use customer insights when making decisions to knowing how to collaborate across silos to improve customer outcomes. Leaders at the most customer-obsessed firms do this stuff better, and they do it more often. Their companies reap the rewards of customer satisfaction, employee engagement, and increased profitability.

In the report, we encourage you to shock yourself out of your leadership bubble, where people rarely tell you the whole truth and often cater to your preferences because it’s easier to do so. We recommend you assemble peers that you respect — we call it your personal board of directors — and invite them to challenge you using an interview guide we prepared. The reason why you have to do this is because none of your direct reports would be foolish enough to put to you the hard questions we have prepared, such as: Can you put yourself in the shoes of your customers? When have you done this recently?

It’s not a trick question. But it also demands action, recent action, and it takes an honest peer whose paycheck does not depend on you to put it to you and wait for your answer — though it’s OK and even desirable if their esteem goes up when you genuinely succeed, as that will motivate them and you to do the right thing.

Nobody promised you that being a leader would be easy, just like they never promised you that the stock options would be easy to spend. But since you are being paid well, you owe it to everybody to do well. Do well by the customer, and you will have left just-OK leadership far behind in the wake of a faster-moving enterprise.

James McQuivey, PhD is a vice president and principal analyst at Forrester. He is also the author of the book Digital Disruption: Unleashing the Next Wave of Innovation.

Stephanie Liu 19 hours ago
In the era of data deprecation, many B2C marketing clients are asking me “How can I get more first-party data?” or “How do I get more customers to share data with me?” It’s a valid question and a totally understandable one. A common recommendation (including from Forrester) to contend with the loss of third-party cookies, […]
Read More
Blog