On June 24, the International Monetary Fund (IMF) released its updated forecasts for global and country economic growth (World Economic Outlook Update, June 2020). The updates to its April 2020 report show a deeper recession in 2020 and a shallower recovery in 2021 for the world economy as a whole, as well as for most countries (see figure below). Indeed, in most countries, the new growth numbers are close to what Forrester has been assuming as the economic conditions for Scenario B for global tech markets — that is, a deep recession in 2020 that lasts into 2021. With the exception of a few countries in the Asia Pacific region, these new forecasts do not support the short or V-shaped recession underlying Scenario A. The IMF did forecast modest recoveries in 2021 but ones that would only erase about half of the economic decline in 2020. And it again highlighted the uncertainties and risks around the 2021 outlook. Of course, these are just forecasts, and the IMF is just one of many forecasters, albeit one with the best access to the statistics of countries around the world. Still, the IMF forecasts at the country level are broadly in line with other forecasters, such as the consensus of forecasts published each week by The Economist magazine (see Economic & financial indicators, Jun 27th 2020 edition). 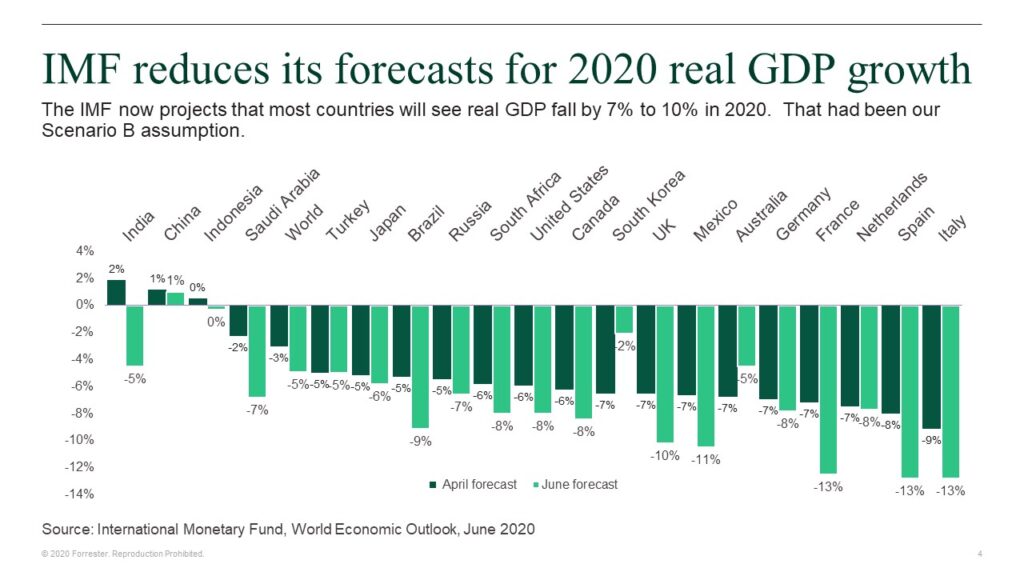 What The IMF Report Means For Tech Markets In 2020

Economic growth rates have a strong correlation with tech market growth rates. We still have to update our tech market forecast model to reflect the bleaker economic outlook. But it is safe to assume that global tech market growth in 2020 will be 2 to 3 percentage points lower than the -5% drop (in US dollars) that we had earlier projected for Scenario A (a short 2020 recession) in our April webinar (see WEBINAR: The 2020 To 2021 Tech Market Outlook At A Time Of Global Pandemic And Economic Recession). That means the probability of Scenario B, with its 8%-or-so drop in global tech purchases in 2020 measured in US dollars, is now over 75%. And 2021 is looking like a year with continued weak demand for tech goods and services.

That’s the overall outlook. But at the country level, there were both downgrades in the economic outlook for many countries — including the US — but upgrades or no change in other countries. These changes translate into the following outlooks for tech markets in the largest countries around the world.

What The IMF Report Means For Tech Markets In 2021

The economic outlook and tech markets for 2021 still remain extremely hazy. The IMF has tentatively projected that many economies will see economic recoveries in 2021. And as the IMF acknowledges, recessions tend to feed on their own momentum, with even financially sound consumers and businesses saving rather than spending. Aggressive fiscal and monetary policies can help achieve that outcome but may not be adopted. Moreover, even if many economies do recover in 2021, the IMF’s projected growth rates for 2021 are mostly less than the 2020 declines. That would leave 2021 economic activity and tech spending still below 2019 levels.

There is one final implication of these forecasts, and it is a regional one. In general, and with exceptions such as India, Asia Pacific countries have done a good job of containing the pandemic and limiting the resulting economic downturn. European countries, with some exceptions, have done an adequate job of containing the pandemic, though at the cost of steep, (hopefully) relatively short recessions. But countries in the Americas (again, with exceptions) have so far neither contained the pandemic nor avoided deep and lasting economic damage. These patterns suggest that tech markets in the Asia Pacific region will recover first, European tech markets will come back (but weakly) in 2021, and tech markets in the Americas will still be at risk of declines in 2021.

Jacob Morgan 2 days ago
Forrester’s European open banking forecast predicts a doubling of the adoption of open banking across countries, and use cases, from 2022 to 2027.
Read More
Blog