It’s been a while since I saw a product demo and thought, “oh damn, that is cool.” I’m obsessed with the mechanics of how it folds. This is the first time in a long time that a new phone hasn’t led with its camera but instead with its ability to fold, small size, and screen quality.

The Galaxy Z Flip is markedly different than last year’s folding phone priced near $2,000. This isn’t so much a flip phone, which implies a 12-digit keypad. Nor is it necessarily a new category that begs for new use cases. It opens to a fairly normal-sized smartphone screen. Yes, it can operate in a split-screen mode, but this also isn’t new — other phones do this. And you can open and close it 200,000 times . . . so you could open and close it about 200 times per day for the three years you are likely to keep the phone.

This feels well timed given that it is both unique and able to leverage existing services/applications.

The video started with a close-up of the camera and from there moved on to form factor and colors, if that gives you any indication of what Samsung believes will appeal to its customers. They gave 5G a quick review and then turned back to the camera they self-describe as “powerful.” Shoots in 8K . . . pretty sick. (I don’t have a 4K TV yet, but the quality of the photos and video does make me want to upgrade from my current Samsung TV.)

Quickly on 5G: One of the concerns with adding relatively new cellular radios to smartphones is the bulk, cost, and battery drain. Samsung claims that its more integrated approach bypasses these typical challenges with new-generation networks, but they were short on details. Doesn’t bother me — every element of the phone, from its core functionality to app developers to sensor manufacturers, is working on reducing use of energy.

The open question around consumer demand for these new devices depends in part on how much the hardware (e.g., the camera) impresses but also on the consumers’ ecosystem, which drives the amplification of the utility consumers perceive. For example, 8K photos are awesome. 8K photos are even better if I have an 8K TV at home to view them. If I take 8K photos, I also want a fast network to upload them to the cloud, where I will also need more storage. The same applies to video, audio, and other media elements. The capabilities are impressive on a single device but really powerful when the ecosystem around them is in place.

Hardware also wants software or applications, today. Fortunately, the developer community for Android is large. There will always be a tension between a large enough base of (new) hardware to be attractive to developers and new hardware features as a differentiator.

An hour is short — too little time to review all the new cool features. Samsung rightly focused on those unique to the smartphone, as well as those that highlight the technology and feature sets.

Samsung also announced quite a few services partnerships around fashion, gaming, and more.

I next got to check the Z out in the hands-on display area — I’m still just fascinated by the folding glass. Camera (10MP) = excellent, including wide angle. Color/screen: good. All good. I just couldn’t get past the folding glass/display — looks like a regular phone when flat. Some apps take advantage of two screens when bent. I’d have to think more here about the great use cases of two screens. The glass folds . . . and doesn’t feel creased — at least, not yet. Just cool. 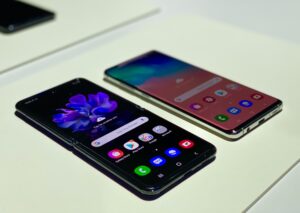 Nick Barber 19 hours ago
In the midst of tech consolidation, brands must think strategically about their CMS Portfolio. Some smart brands are realizing that a multi-CMS strategy can actually improve agility, flexibility, and speed to market.
Read More
Blog

Keith Johnston 24 hours ago
Leonardo da Vinci said, “To develop a complete mind, study the science of art. Study the art of science. Learn how to see. Realize that everything connects to everything else.” This couldn’t be more profound in an era of marketing, advertising, and digital experience, where the distinction between a brand’s promise, how it’s communicated, and […]
Read More