Among a series of updates unveiled at Facebook’s F8 Developer Conference on Tuesday, Mark Zuckerberg echoed a common refrain: The future is privacy.

Fresh memories of Facebook’s mistakes and looming fines are not the only reasons why Zuckerberg’s refrain is relevant; in this cultural moment, consumers are clamoring for brands that build community around specific values. Large companies attempt pivots toward a values-driven strategy, and niche startups are pumped with VC cash because of their promise to make experiences more empathetic. By emphasizing goals like “the feeling of being together” and building “next-gen computing that is all about interaction and privacy,” Zuckerberg says all the right language that consumers are desperate to hear today.

Zuckerberg’s storytelling around shared purpose, human-to-human connection, and new privacy measures triggered riotous cheers at the event. But how did his message resonate broadly with consumers? After 2018 left consumers feeling skeptical of Facebook, if not downright violated, do users look at Zuckerberg’s new promises and detect a rose-hued filter — or do they feel genuinely inspired?

To find out, we took a pulse of consumer energy — the dynamic force that fuels consumers’ motivation to embrace a brand — hours after the conference.

Data shows that among a distinct group of consumers who watched the F8 conference keynotes, followed real-time updates, or immediately discussed the event with friends, the message resonated. At the end of December 2018, total consumer energy around Facebook was at 38 (on a scale from 0 to 100); 24 hours after F8, consumer energy among this loyal fan base surged to 45. These individuals felt a rush of connection to Facebook’s brand, trust in the company, excitement about the announcements, and a sense of empowerment given imminent changes. But these hyper-clued-in customers skew male and are the most frequent users of Facebook.com. A consumer energy read on the larger universe of consumers tells a different story.

For consumers who access Facebook.com at least daily, consumer energy levels after F8 mirrored those in December 2018: Consumers’ willingness to trust the brand increased by one point. For consumers who access Facebook.com once a week or less often, consumer energy waned to 27 as users felt disconnected, less trusting, uninspired, and unmotivated in response to Zuckerberg’s new promises. 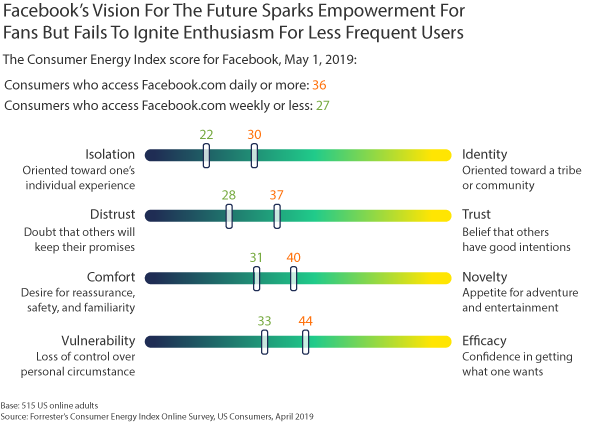 As Facebook strives to become the hub for “all the aspects of one’s life” by facilitating everything from payments to romantic matches, the company must earn and protect consumer trust like it’s sacred. By intensifying the sense of community around Facebook’s values, emphasizing empathy for consumers, creating moments of insight and discovery, and enabling consumers with a sense of control, Facebook can prepare subsets of its frequent users for its next big thing.

Forrester clients can connect with me via inquiry and nonclients through LinkedIn and Twitter to learn more about how consumer energy and consumer emotion fuel engagement with your brand.

Anjali Lai January 17, 2019
After a tumultuous 2018, Facebook’s fate looks bleak. While the characteristic hope of the New Year lingers, you might look at the glimmers of positive news around Facebook with optimism: Advertisers are still using it; the company is investing in local news partnerships in a public display of its commitment to quality reporting; and consumers […]
Read More
Blog

Stephanie Liu 22 hours ago
The privacy landscape is shifting quickly. It’s a critical time for B2C marketers to get involved in their organizations’ privacy programs.
Read More
Blog