In his number one international best seller Sapiens: A Brief History of Humankind, Dr. Yuval Noah Harari observes that people the world over who do not believe in the same god or obey the same king are more than willing to use the same money.

As Dr. Harari points out — historically speaking — money required no technology breakthrough. It was, and remains, an entirely psychological revolution. Money and its value are, as Harari described, “an intersubjective reality that exists solely in people-shared imagination.”

It’s not the dollar or the yuan per se, nor is it the inherent chemical structure of a note or coin that give money value. For example, across Africa and Asia Pacific, cowry shells were imbued with a notation of value for nearly 4,000 years, and the cowry shell sign represented money in ancient Chinese words.

And while many of us immediately associate money with “paper,” Australia issued the world’s first polymer banknote developed by the Reserve Bank and Commonwealth Scientific and Industrial Research Organisation (CSIRO) in 1988. By 2003, Romania, Australia, and New Zealand had completely converted to polymer banknotes.

Money is anything that we are collectively willing to use as the basis for a systematic and consistent exchange of goods and services — and as a temporary store of perceived wealth. And money is arguably the most critical element in the function of our highly evolved complex social systems: a trust imperative like no other.

Trust is key, especially when you consider that money is actually fiat currency issued by a central bank, and only around 10% of the global money supply is represented as actual circulating recognisable banknotes or coins — in the US, this figure is 11%, according to the Federal Reserve. The other 90%? Ones and zeros on the hard drives of servers in financial institutions around the world.

Despite the reality that physical cash is largely absent from the world’s economy today, central banks globally have been reluctant to convert physical banknotes to digital coins — even in the face of the rising adoption of non-government-backed and volatile cryptocurrencies by consumers and demand from policy makers for programmable, stable value central bank digital currencies, or CBDCs.

But that is about to change when the flame is lit for the Beijing Winter Olympics and China officially exits its four-year CBDC trial and fully launches its digital currency, e-yuan. Countries like Australia, that until recently have resisted the idea of a retail CBDC, are now reconsidering their position in response.

Indeed, our initial analysis of key economies across the APAC region indicates that central banks are actively grappling with different policy motivations, consumer behaviours, and industry readiness — even a ban on some forms of cryptocurrency on religious grounds. The landscape as shown below (click to expand) is varied, but China is leading the way in demonstrating what is possible with a CBDC. 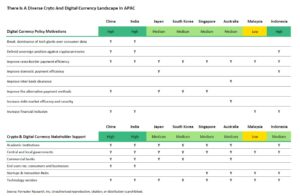 In our Predictions 2022: Asia Pacific report, we also highlighted that the emergence of CBDCs in the region will be an important step toward enabling the rise of truly digital societies — societies where the combination of programmable money with verifiable digital self-sovereign identity will provide benefits such as:

In countries that adopt a two-tier CBDC operating model — where central banks sit on the top layer to manage the issuance and withdrawal of CBDC while banks sit on the second layer to manage the circulation and maintenance of the CBDC, banks will still play an important role in the circulation and operation of CBDCs together with the central bank. When it comes to CBDC risk management, responsibility is likely to shift from banks to central banks, since the latter now have better visibility into cash flow.

For non-financial services organisations, it’s crucial to understand the maturity and impact of CBDCs on your industry. Set the right expectations for its different phases, and adjust your business plans accordingly. Although firms will start on their CBDC journey sooner or later, no two companies will have the same starting point. Ultimately, your firm will use the CBDC to better serve your customers, so knowing how to embed CBDC into your products and services to provide excellent customer experience (CX) is the key to maximising its value. Banks can differentiate themselves from others in digital experience by seamlessly embedding CBDC-based retail payment services into their banking apps.

Lastly, firms need to be aware of potential challenges. Mass adoption of CBDCs won’t happen overnight and will take time. Companies must understand that changing customer behaviour is not easy; it requires continued investment in CX improvement and collaboration with all ecosystem participants across banks, fintechs, technology providers, businesses, consumers, and central banks. CBDC is designed in the interest of the public, and central banks will likely request banks or other participating financial services companies to not charge merchants any payment commission fees. Financial services companies need to change their mindset to build new business models based on data or technology usage, subscriptions, or shared services rather than commission fees. Don’t expect to earn profit from these new business models until later phases of the CBDC; focus on designing customer-centric use cases and accumulating CBDC users in the current phase.

Over the next few months, we will continue to investigate these issues, share insights, monitor, and report on the CBDC landscape and implications for consumers and businesses alike.

The BNPL Opportunity For Banks: How To Tap Into This Growing Market

Alyson Clarke 7 days ago
The “buy now, pay later” (BNPL) market is hotter than ever. With a strong presence on major retailers’ websites and increasing brand awareness among consumers, BNPL is receiving growing attention from the world’s top banks, lenders, and credit card providers. While the concept is nearly a century old, Forrester has been tracking the “reemergence” of […]
Read More