To measure precisely what kind of emotional toll COVID-19 is taking on consumers — and how current consumer sentiment will influence imminent behavior — we are applying Forrester’s Consumer Energy Index, our data-driven framework that captures how ready and willing consumers are to reach out to brands.

After dropping dramatically during the months of March and April as the COVID-19 pandemic became a harsh reality across the US, consumer energy among US online adults hovered at its lowest levels of the past two years. By mid-May, flickers of consumer energy signaled a growing consumer appetite to reengage with brands — particularly in suburban and rural areas.

Now, in early June, the conditions have changed drastically. Every US state has at least partially reopened, cases of COVID-19 are rising in certain districts while the overall US count falls, and the unleashing of activist sentiments has driven hordes of consumers to gather in protest. The most recent pulse of consumer energy shows a slight increase along all four dimensions: 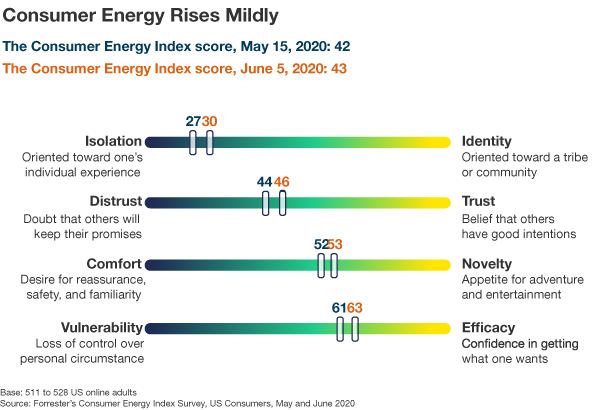 What The Data Means

While the aggregate data serves as a useful baseline, a deeper analysis reveals critical differences in consumer energy across consumer groups. Most importantly, consumer energy varies by:

What This Means For Brands

As consumers begin to reengage in commercial exchange, they navigate conflicting emotions, such as optimism and caution. Additionally, increasingly sensitive values-based consumers are putting more pressure on brands not only to make a statement about their role in rising activist efforts but also to show real change through sustained action. In this tumultuous time, brands must speak to consumers in a way that respects the emotional tenor of the moment and that dials up consumer energy to encourage brand engagement. Marketers should consider their potential to move consumers up the scales of all four consumer energy dimensions — to foster a sense of shared identity, validate consumer trust, stoke optimism around change, and encourage consumers to act on their empowerment.

Questions, comments, or ideas? I look forward to sharing more data detail and discussing via inquiry.

Xiaofeng Wang 2 days ago
Following the previously published report covering key CDP vendors in Asia Pacific, I interviewed 10 customer data platform (CDP) customers in the region and published a new report, The State Of Customer Data Platforms In Asia Pacific. Here are the key findings on the state of CDP in APAC. CDP Popularity In APAC Varies By […]
Read More