Would betting your business on the metaverse today be a bold, visionary decision or just a fashionable but foolish gamble? Only time will tell, but it would require a high tolerance for risk, because the metaverse doesn’t exist yet. So for now, Forrester recommends that companies take the prudent path: Conduct experiments in virtual 3D worlds such as Horizon, Spatial, and AltspaceVR — precursors to the metaverse.

Conducting experiments like this is a challenge, though, because extended reality (XR) experiences are both revolutionary and evolutionary — a radical departure from familiar website and app experiences in some ways but, in other ways, also continuous with them. I researched the issues and interviewed experts about them, distilling my findings down to 10 principles you can use as a foundation for envisioning your organization’s path to the metaverse.

The fusion principle is that, although virtual, mixed, and augmented reality (VR, MR, and AR) experiences differ in terms of their intended uses, they lie on a spectrum in terms of sensory experience: 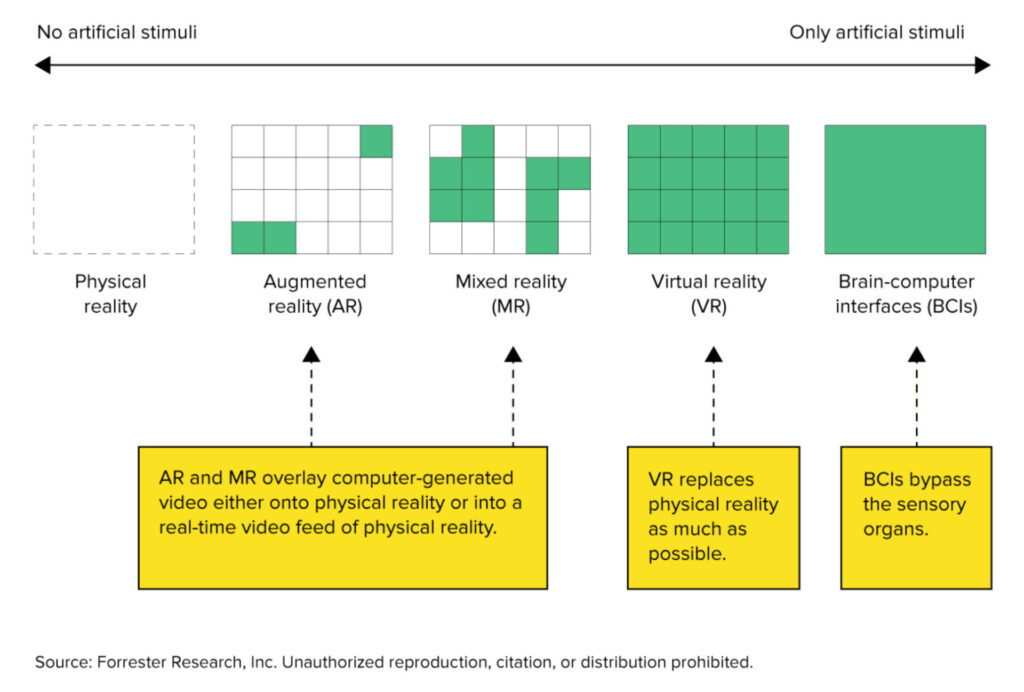 The two extremes are 1) unmediated human experiences of physical environments and 2) entirely mediated experiences through brain-computer interfaces that replace a person’s entire range of sensory inputs — a notion that still lies almost exclusively in the imagined realm of sci-fi for now, but it’s a useful hypothetical.

Between those two extremes, VR, MR, and AR experiences trick the human brain into fusing, in various proportions, stimuli from the physical environment with stimuli that are artificially generated. For example, VR fitness app Supernatural visually immerses users in the workouts, whereas the AR swim goggles by FORM show users various metrics nonintrusively while they swim. So designing XR experiences requires carefully deciding on the right mix for the intended purpose.

The empiricism principle may seem obvious, but I’ve been struck by how many people express either enthusiasm or skepticism about XR based on speculation and assumptions instead of direct observation and evidence gathered from experience. That’s risky, because XR experiences are very different in many ways from familiar digital experiences.

Apply this empiricism filter as a reality check to the enthusiasm or skepticism of colleagues, customers, partners, analysts, journalists, survey respondents, and research study participants alike.

The eight other principles I highlight in Designing The Metaverse (which went live today) in addition to fusion and empiricism are the principles of depth, attention, freedom, locomotion, interaction, presence, permission, and magic. Each one examines an idea that’s important to master to design XR experiences. One shift in mindset you need to make, for example, is to learn to design for six degrees of freedom instead of the mere two that are typical in traditional app and website experiences. Another has to do with multiuser experiences, where today’s convention is to represent users’ presences through cursors with initials on them, whereas in XR, a user’s presence is often represented by an avatar, which introduces a lot more complexity and potential.

And as in all experience design work, it’s crucial in XR not only to apply these new principles but also to ground your efforts in a human-centered design framework, with extra emphasis on designing inclusively from the start. When I interviewed Ken Olewiler, principal and managing director at Punchcut, for this research, he rightly pointed out that “companies are excited about this but are not sure where it delivers value, so they need to think of human needs first, the problem people are trying to solve, and how XR can make that better.”

To learn more about the fusion and empiricism principles as well as the rest of the 10, check out the report: Designing The Metaverse.

Is your company creating XR experiences, either as its central focus or as experimental pilots? If so and you’d be willing to speak with me to share lessons learned, reach out and let’s talk!

Beyond The Cartoonish Metaverse — XR Designers And Users Deserve Better

David Truog April 28, 2022
XR designers cut corners because of the limitations of headsets but XR streaming from the cloud could liberate them.
Read More
Blog

Martin Gill 1 day ago
What is your ambition for your customer experience team for the next decade? Pick your CX team archetype. Learn more in this post.
Read More
Blog