Facebook continues to battle gale force headwinds. The Facebook Papers still dominate the news cycle, and during today’s Facebook Q3 2021 earnings call, the company reported quarterly revenue below market expectations (like Snap, the company pointed to Apple’s App Tracking Transparency, or ATT). To counter, Mark Zuckerberg emphasized the company’s commitment to help bring the metaverse (as the next computing platform) to life, indicating that it would be “a major part of” Facebook’s investment going forward. It plans to spend at least $10 billion on metaverse-related projects this year and is changing its financial reporting to separate revenue between Facebook Reality Labs and its family of apps.

More details about Facebook’s metaverse strategy (including a rumored parent company name change) will be revealed at this Thursday’s Facebook Connect conference. Ahead of that, Forrester finds that consumers largely remain neutral about Facebook becoming a metaverse company. And if it continues to struggle curbing issues around mis/disinformation, extremist content, consumer privacy, teen safety, etc., then these same issues will fast follow Facebook into the metaverse.

Forrester polled 745 adults in its CommunityVoices Market Research Online Community (MROC) across the US, Canada, and the UK about their attitudes on a possible Facebook parent company name change (see Figure 1). The results of the poll indicate that:

As for Facebook becoming a metaverse company, most (45% of those polled) were neutral on the matter, signaling a “wait and see” attitude as many consumers still don’t understand what the metaverse is. 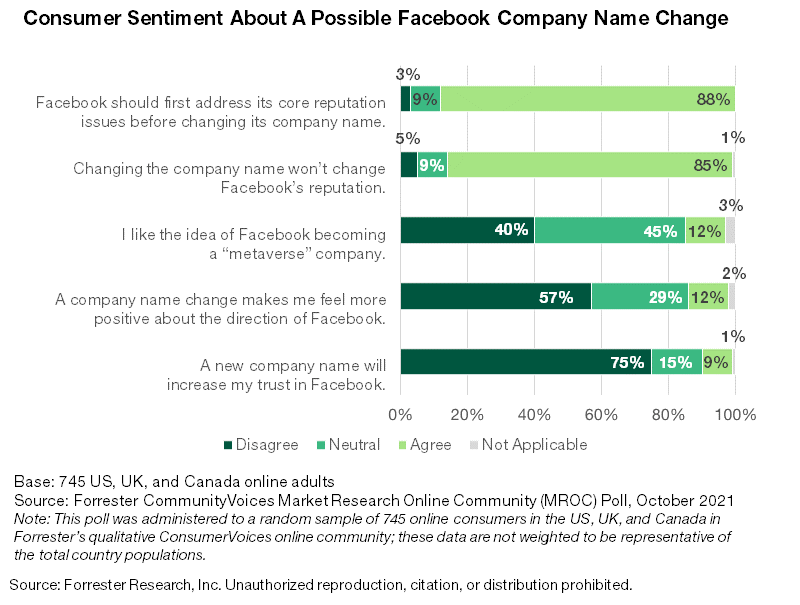 In the wake of Facebook whistleblower Frances Haugen’s congressional testimony and the six-hour global outage that affected Facebook’s ecosystem of apps, Forrester included a question in its October 2021 Consumer Energy Index And Retail Pulse Survey. We asked 1,003 online adults (507 US and 496 UK) about their current thoughts and behaviors around Facebook — its apps and the company as a whole (see Figure 2). Consumers’ desired changes include:

Forrester’s survey also revealed general ignorance of Facebook’s app ecosystem footprint. Almost half (48%) of US online adults didn’t realize “until now or recently” that Facebook also owns Instagram and WhatsApp. This adds to the case for Facebook to change its parent company name to distinguish its apps from that of the company to mitigate further confusion. 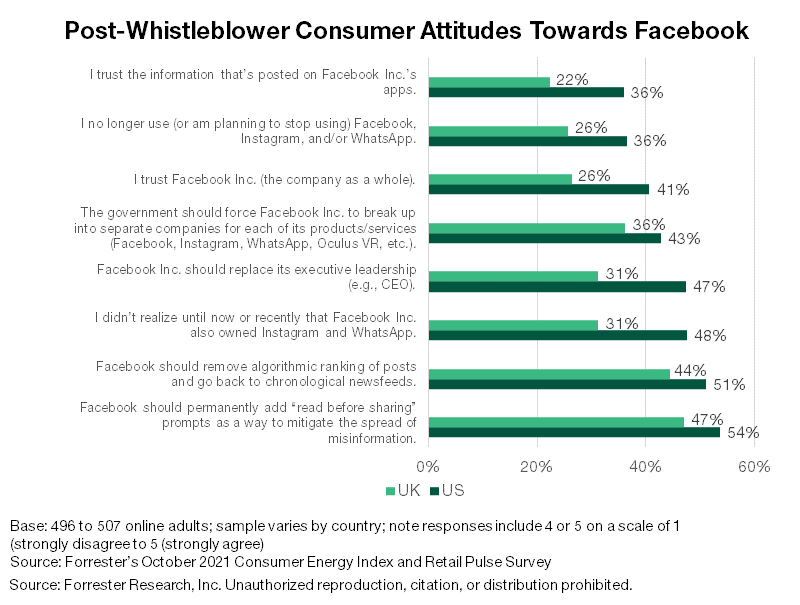 Marketers: Be Proactive To Be Part Of The Solution

No, the metaverse won’t fix Facebook. Facebook must fix itself or be forced to change by several stakeholders responsible for solving the mounting issues surrounding the company: consumers, parents, regulators, and, yes, the marketing community. Over the past two weeks, Forrester laid out a number of proactive actions for marketers to take for their part of the solve, including:

Marketers, how do you plan to approach Facebook in 2022? Tweet me your thoughts at @McProulx, or set up a Forrester guidance session with one of our media analysts.

Thanks to Jessica Liu for contributing to this blog post.

Stephanie Liu 16 hours ago
The privacy landscape is shifting quickly. It’s a critical time for B2C marketers to get involved in their organizations’ privacy programs.
Read More
Blog

Kathleen Pierce 2 days ago
Here’s a thought experiment to test if your organization is ready for the future of localization. When you think about your customer and employee experience (CX and EX), do you think about what it’s like in each of their languages? Or do you unconsciously assume a monolingual experience? If we’re honest, many of us, especially […]
Read More