NVIDIA just announced that it plans to acquire Arm Limited from SoftBank for $40 billion.

The combination aims to conquer the enormous compute market that has long been dominated by the x86 architecture (and, thus, Intel and AMD). The x86 platform remains the leader in PCs and data centers, but the future growth prospects lie in edge computing, the internet of things (IoT), and mobile devices — where Arm’s designs excel. Should this deal go through, the new post-acquisition NVIDIA will be in a prime position to capture that growth.

The deal must still clear many hurdles, the thorniest of which will be the approvals from several governments. Since the UK approved Arm’s sale to SoftBank back in 2016, it is likely to also approve this move. Antitrust concerns should be muted. While NVIDIA is already a major growth story, Intel, AMD, Broadcom, and others remain powerfully competitive in the semiconductor market. Despite this, China and the EU will likely take dimmer views of a US firm acquiring Arm and must also approve the deal, as must the US.

Why would NVIDIA pay more than 27 times revenue for Arm?

This deal is about future revenue and growth, not about past performance. Investors agree. While NVIDIA’s annual revenue is $13.065 billion and Arm’s is a mere $1.441 billion, the combo already has a significant enterprise value lead over Intel despite Intel’s huge revenue advantage at $78.95 billion. 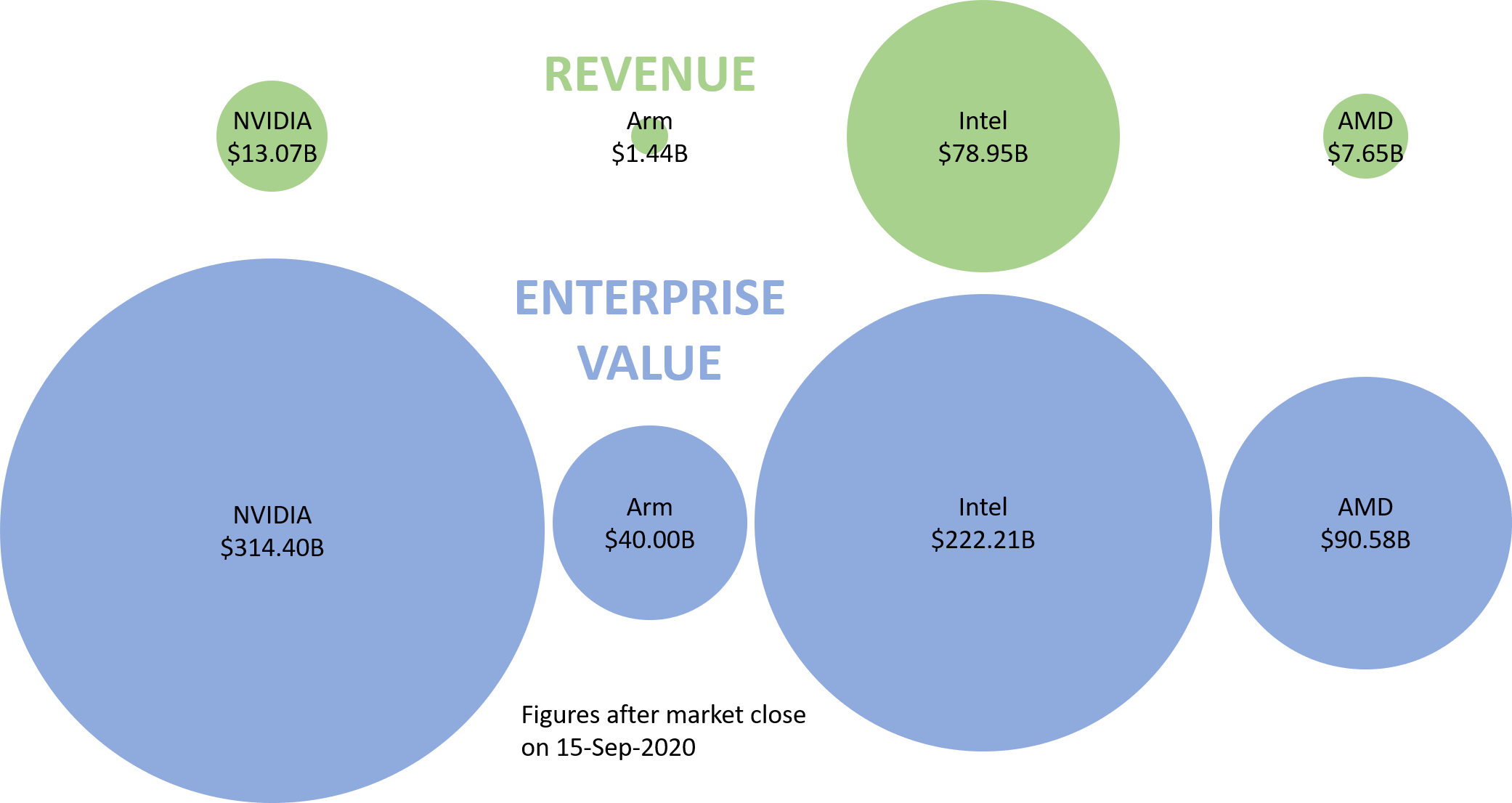 NVIDIA already has a strong footprint in data centers with its GPUs. These GPUs act as companions to general purpose processors like x86 and Arm — they cannot effectively function as a stand-alone. Buying Arm allows NVIDIA to control the full processing capability — powering everything from tiny IoT devices to the data center and cloud to supercomputers.

NVIDIA won’t kill the goose that lays the golden eggs

There’s potential for strategic peril in this deal, to be sure. Arm’s success is built on being the Switzerland of silicon and licensing its designs to giants like Apple, Samsung, and Qualcomm. NVIDIA could tamper with Arm in ways that alienate these licensees. NVIDIA could start competing with those licensees or keep Arm’s best designs for itself. This heavy-handed approach seems unlikely, however; NVIDIA’s savvy CEO addressed this issue during his announcement. Ultimately, the synergies between NVIDIA and Arm technologies will be recognized in the medium term — for example, making chip technologies that improve the AI and graphics capabilities of endpoint devices, licensed as they have always been to OEMs.

You’ll see some growth in Arm workloads in the cloud . . .

Forrester’s data indicates that traditional infrastructure spending will decline in 2020, and 2021 also looks anemic. Firms are accelerating their moves to cloud-based services like AWS, Azure, Google Cloud Platform, and Alibaba Cloud. Cloud providers are already offering Arm-based instances such as AWS Graviton, but migrating workloads from x86 to Arm is difficult. Thus, technology leaders should not expect massive growth in Arm workloads via the cloud hyperscalers. We believe more potential exists in edge computing.

. . . but the biggest growth opportunities for NVIDIA + Arm are at the edge

The edge computing market is still in an early stage, so the opportunity is there for any vendor and any platform. Because it has almost no inertia, it is a perfect breeding ground for Arm. It is especially attractive for AI. Enterprises see the value of distributing automated decision making to the edge — where the data exists and the actions take place. Many AI workloads are now in public cloud services, but we see evidence of a strong migration to not necessarily replace cloud but to augment it at the edge. As this AI migration happens, GPUs and other specialized chips will be needed. A likely outcome of this technology combo will be hybrid CPU-GPU processors optimized for such workloads.

Data centers — and technology in general — are voracious consumers of electrical power and cooling energy. With so many enterprises now taking sustainability seriously, we need to embrace tech that is more planet-friendly. Arm processors consume less power than other designs, which is why you find Arm designs in 95% of the world’s smartphones. Data centers equipped with Arm processors should be more efficient. Edge devices will outnumber data center processors by multiple orders of magnitude. Using Arm chips for those devices will reduce the aggregate power load that they might otherwise have created. And Arm-powered PCs are coming, with Apple’s announcement the most notable recent move. Even x86 stalwart Microsoft has now embraced Windows on Arm.

The ongoing US-China trade war is forcing Chinese companies to abandon US-based technologies and vice versa. As a result, Chinese tech vendors are moving away from x86 to Arm-based processors, many of their own design. Chinese licensing for ARMv8 remains secured, but future designs are at risk because NVIDIA is a US-based company. Thus, Chinese vendors are pursuing a difficult and risky path and developing their own processor architectures.

x86 and Arm are not the only designs in town

A few other platforms hold promise as alternatives. Leading contenders include the Power architecture that IBM open-sourced to the Linux Foundation in 2019 and the open RISC-V architecture. Vendors face monumental hurdles in this pursuit, but if they succeed, the shift will erode US firms’ semiconductor dominance.

This deal isn’t expected to close before late 2021 (at the earliest). Until then, product codevelopment between NVIDIA and Arm will be restricted to a classic partnership. Explore what diversifying into Arm would mean for you in concert with your cloud services and hardware suppliers, and monitor those suppliers’ plans. Pay special attention in your edge computing strategy. Competition between Arm and x86 will benefit you over the long haul.

With CX EMEA, transform your customer experience and help your organization grow. Join in London or virtually on 22—23 June.

Planning Is Paramount When Adopting SOAR

Allie Mellen 19 hours ago
To succeed with a security orchestration, automation, and response (SOAR) offering, outline how you'll use it first.
Read More
Blog

Paul McKay 22 hours ago
Gaia-X launched to great fanfare in 2019 as a joint initiative of the German and French governments to reclaim data sovereignty from non-European public cloud providers. Despite hefty promises, production-ready services have not been delivered to the market, with customers continuing to wait like poor Godot. While the hype around Gaia-X has fizzled out, the […]
Read More